19 couples walk down the aisle at Albert's on Valentine's Day

They were among the 19 couples to get married and renew their vows on Valentine's Day at Albert's Diamond Jewelers. 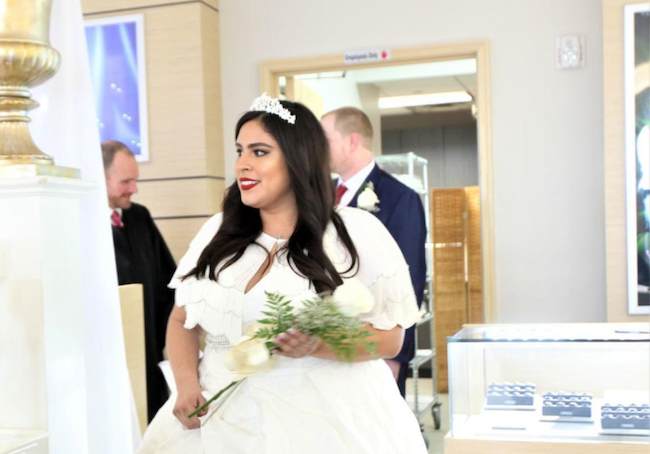 SCHERERVILLE — Hammond couple Allen Koelling and Susan Hale looked into each other's eyes as they said “I do,” sealing 20 years in the making with a kiss and a walk down the aisle, hand-in-hand.

They were among the 19 couples to get married and renew their vows on Valentine's Day at Albert's Diamond Jeweler's.

“She grew up down the street from us, I knew her since she was this small,” Koelling's mother, Nora Kutsenda, said of her new daughter-in-law as she motioned knee-height. “This is like the final link to a happy relationship.”

“He's my support, he's my rock,” Hale said of her new husband and long-time love. “He's always there for me.”

The couple said their Valentine's Day at Albert's will be remembered forever. Joshua Halpern, an owner of Albert's, said the jewelry store has been hosting Valentine's Day weddings and vow renewals for 21 years. Halpern said his own parents got married on Valentine's Day 51 years ago.

“My favorite part of this is meeting so many new people in love and sharing that big moment with them,” Halpern said. “We're sharing in a moment in their lives that they will remember for the rest of their lives and for me, that's extremely special.”

Every year Albert's employees get to be audience to dozens of ceremonies all in one day. Employees Natalie Mora, who organized much of the event, and Christine Martinez said they still get misty eyed watching the couples and their families on their big day.

“The neat thing is that they all have different stories,” Martinez said.

Miller and Gruett have been marrying couples on Valentine's Day for three years now.

“There's always a diverse group,” Miller said. “You have vow renewals of people who have been married 30 or 40 years and you have brand new marriages of people in their 20's.”

As freshly married couples walked down the aisle as Mr.'s and Mrs.'s, their relatives welcomed each other into their families with hugs and handshakes.

“My favorite thing is seeing all of the different families and everyone happy on Valentine's Day,” Miller said. “There's a lot of people coming together today and starting families.”

Lynette Otamendi walked down the aisle in a dazzling white dress as her soon-to-be husband, Craig Covaciu, watched with anticipation. Otamedni and Covaciu, of Crown Point, shared the special moment with their 4-month-old Jane Harper and 3-year-old Olivia Lynn.

The couple was going to take a simple trip to the courthouse to tie the knot; however, they had a change of plans when they went to Albert's to pick out their wedding band.

“We went to buy a wedding band and heard about this and ended up changing our plans,” Covaciu said.

Otamendi described the wedding as “amazing.”

“It was a 20 minute session but it felt like a real wedding,” she said. “I'll remember this forever.”