Twenty years ago, Mary Ellen and Roy Slazyk said "I do" at the original Albert's Diamond Jewelers in the Indiana Harbor neighborhood in East Chicago. 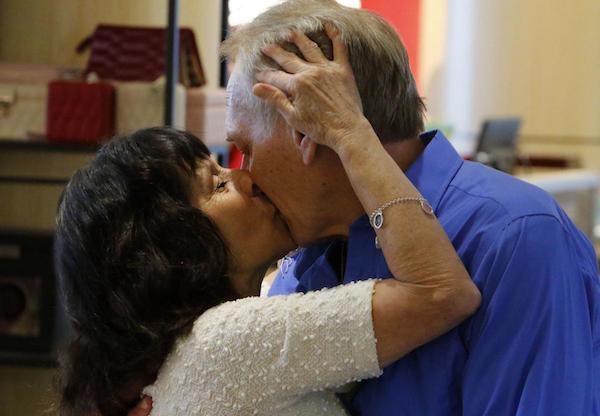 SCHERERVILLE — Twenty years ago, Mary Ellen and Roy Slazyk said "I do" at the original Albert's Diamond Jewelers in the Indiana Harbor neighborhood in East Chicago.

This year, on Valentine's Day, the Slazyks decided to renew their vows at the Albert's Main Street location in Schererville after spending two decades together.

However, this could be the last anniversary the Hammond couple spends together.

Two-and-half weeks ago, Roy collapsed on the floor of their home and turned gray. They didn't know why but would soon find out Roy has terminal lung cancer.

"The doctors told us that it's inoperable, and it's incurable," Mary Ellen said. "We don't know how much time he has left."

"I'm not trying chemo or anything else because there's no guarantees," Roy added. "I've experienced seeing other people go through it, and all they really wound up doing was getting sicker."

When Roy was taken to the hospital, he had pneumonia in one lung and a three-inch tumor in the other.

The couple agreed they're taking it one day at a time, even if they don't know which day will be Roy's last.

"The only thing I'm concentrating on is I can't change things. I have no timeline, so I'll make the best of what time I have left," Roy said. "I'm going to keep things as normal as possible and retire to the fact that there is no saving me — no matter how I decide to go. Just peaceful and painless as possible is all I'm shooting for."

On Friday, Mary Ellen's brother, Ken Gunia, walked her down the aisle at Albert's.

The bride wore a sparkling, short-sleeved, white dress that floated just above her knees while her husband wore a blue-collared shirt.

"Let's go," she said to Gunia before making her way to Roy.

Though they have been together for 22 years, Roy appeared nervous, fidgeting with his hands while Mary Ellen, carrying a single white rose, walked to meet him at the altar.

"You have been the greatest loving husband even though I've got a lot of faults," Mary Ellen said to Roy.

"You're a great man. You're not perfect, but you were perfect for me. Just a couple of weeks ago, we were told that our time together isn't going to be real long because you got cancer, and the doctor said it was incurable and inoperable," she continued in between sniffles. "Whatever time we have together, I've cherished in the past, and I'll cherish now because I love you so much. And I wish we could be together for 1,000 years."

There wasn't a dry eye in the crowd as the couple shared their first kiss after renewing their vows.

After the ceremony, Joshua Halpern, owner of Albert's, presented Mary Ellen with an A. Jaffe Maps necklace with the location of the Schererville Albert's and the couple's anniversary engraved on it.

"We thought it would be a wonderful symbolism of (your anniversary)," Halpern said.

The couple then had their first dance to their song "Truly Madly Deeply" by Savage Garden.

For Alexandra and Mary Kaminski, seeing their mom and stepfather renew their vows was "very special."

Mary Ellen said she knew the couple would marry one day.

The pair met while playing darts together on an informal team.

Things were "crazy" in 1998 for Mary Ellen, who had recently left her job, got sick and then had to have surgery.

"He was just a friend from the dart team," she recalled.

The then-single mom remembered how friends urged her to call them if she needed help, including Roy, who took a weekend off from work to help take care of Mary Ellen and her three daughters — Elizabeth, Mary K. and Alexandra.

"We started dating right after that. That opened my eyes to the quality of man he is. He's a real man — no doubt about it," she said before blowing Roy a kiss.

While most would have "run for the hills," as she put it, Roy "jumped in" and became a fantastic father and grandfather.

Mary Ellen said she knew the couple would get married when she discovered they both had a photo of their grandparents hanging in the same frame, both by the front doors of their respective homes.

The couple also had family who grew up in the same area, adding "there's no doubt" the two probably crossed paths long before they began dating in 1998.

"I wish I would've met him before I met my first husband. Things would be so much different. ... But better late than never," she said.

The secret to a great marriage, the couple said, is love.

"Don't get on each other's nerves and keep it together," Roy said. "It's no secret that your love for each other holds it together."

Thank you to our participating vendors:

Decor, Rose, Boutineer for Bride and Groom: Monarch Florist and Gifts and Events in Schererville, IN

Wedding Cakes: Strack & Van Til in Schererville, IN

Videography: Dave Ervin from Ervin Video Service in Schererville, IN