Albert's Diamond Jewelers presented a check of $171,000 to the Indiana State Chapter of the National Multiple Sclerosis Society 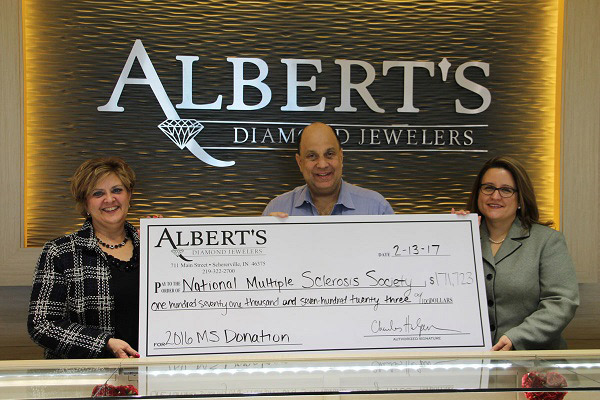 It was a trade of good news on Monday at the Albert’s Diamond Jewelers store in Schererville. The staff presented a check of $171,000 to the Indiana State Chapter of the National Multiple Sclerosis Society and in return, the employees received a glass trophy, honoring the business into the MS Circle of Distinction for surpassing the $1 million mark of lifetime donations.

“Their donation is amazing and they do this work on their own,” Holly Messick, National Multiple Sclerosis Society Vice President of Events said. “They lead this every year and MS benefits from it.”

“From a national perspective, raising around $200,000 is pretty significant,” she said. “It is huge.”

The staff at Albert’s began hosting an annual auction to raise money for research after company President Josh Halpern’s mother, Donna, was diagnosed with the disease.

“When she (Donna) got diagnosed the family wanted to do something to help fund the organization and hopefully find a cure someday,” Christine Martinez, Marketing Coordinator and Media Specialist at Albert’s.

For the last 13 years, the store has invited the community members and businesses to partake in the fun. The auction is held at the Indiana Visitors Center, thanks to Speros Batistatos of the South Shore Convention and Visitors Bureau, who let the store staff hold the constantly growing event. 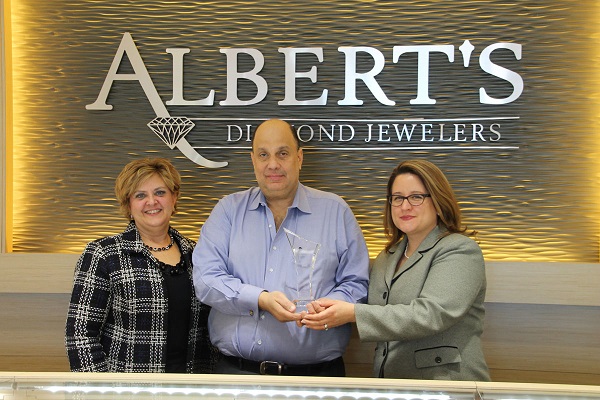 “The auction, was something the Halperns started on their own, so it used to be in the store. It got so big we couldn’t accommodate the amount of people, which is a good problem to have.” Martinez said.

The annual auction includes more than 700 items to be sold either live or in a silent form, and they may include anything from a lease to a BMW, to concert and sporting event tickets, to small gift cards to local restaurants.

There are 15 to 20 big sponsors each year as well who donate food, a drink bar, the baskets in which the items are wrapped and displayed in, and even more bidding items. 100% of the proceeds go to MS research, which is what the Halpern’s specifically desired. The largest amount collected was in 2015, when the store gave the society a check for $235,000.

“We have a national program advisory committee comprised of researchers and scientific peers throughout the country,” Leigh Ann Erickson, the Indiana Chapter President of the National Multiple Sclerosis Society said. “They determine what looks most promising in the world. Funding what the most promising research is, that’s where these dollars go.”

Though the staff at Albert’s already knew about the glass award coming their way, they agreed it was nice to see and be able to present in the store as they achieved the lofty ambition to break the $1 million donation mark. They are also already looking forward to increasing from the 2016 collected amount and surpassing that goal even more.