Albert’s Diamond Jewelers hosted the largest single fundraiser in the country for the National Multiple Sclerosis Society last year, and appears to have surpassed that haul by 15% to 20% this weekend. 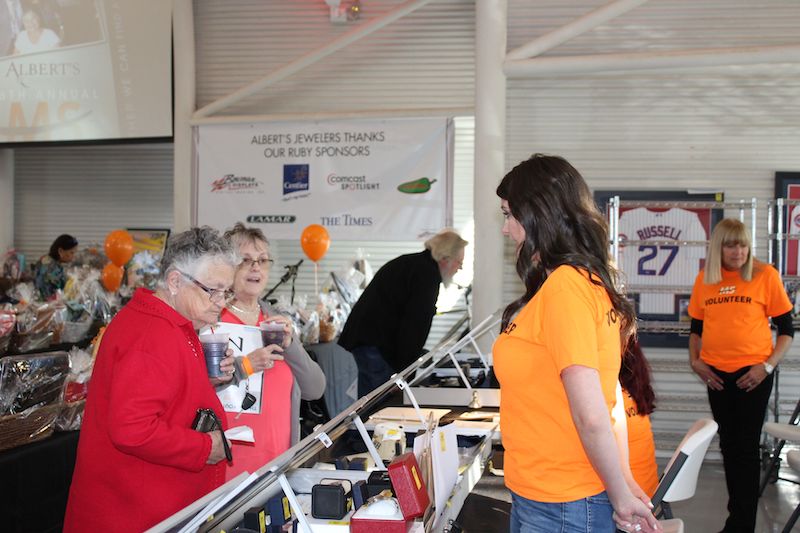 Albert’s Diamond Jewelers hosted the largest single fundraiser in the country for the National Multiple Sclerosis Society last year, and appears to have surpassed that haul by 15% to 20% this weekend.

"It was great, our best year yet," Albert's Diamond Jewelers President Josh Halpern said. "We're still tallying the final number but we believe we brought in at least $354,000. I had an outside goal of $350,000 and didn't know if we would get there or not but we seem to have breezed right by."

Hundreds of people turned out this weekend to the 6,500-square-foot W.F. Wellman Exhibit Hall in the Indiana Welcome Center in Hammond for the 16th annual Albert’s MS Auction. They placed bids on sports tickets, fine whiskeys, cars, and of course, jewelry.

At least 400 people attended, including — for the first time — Cyndi Zagieboylo, the president and CEO of the National Multiple Sclerosis Society who flew in on a red-eye flight from New York City.

"Looking toward a world free of MS is truly my life's work," she said. "I've been to many, many events, even in the last two weeks. I've never seen an event like this. This is really a crazy event. One of the things that makes this event so special is that it's founded on the devotion and love one man has for one woman. Fred (Halpern) started this event 16 years ago to demonstrate to Donna (Halpern) how special she is. It's truly inspiring."

The fundraising auction likely has now raised money than $2.5 million since it started in honor of Donna Halpern, who has the chronic disease that disrupts the central nervous system, affecting millions of people. The money raised goes to find a cure and also to provide multiple sclerosis navigator funds to help people in Northwest Indiana with expenses like medication, nurses, wheelchairs and wheelchair ramps.

"We were recognized a couple of years ago as in the circle of distinction along with companies like Boeing," Josh Halpern said. "We're pretty proud that a little jewelry store is up there with the big Fortune 500 companies."

About 70% to 80% of the crowd returns every year, but the Albert's MS Auction continues to attract new people, Josh Halpern said. Bidders spent more than $7,000 on a car Bosak Honda donated, more than $9,000 on pieces of jewelry and more than $10,000 on a vacation to Mexico.

The fundraiser received a significant amount of support from the business community, with donations from Jalapeno's The Hottest Mexican Restaurant, Lithographic Communications, Pepsi-Co. in Munster, Asparagus Restaurant in Merrillville and Nothing Bundt Cakes and Ciao Bella in Schererville.

Fred Halpern said the event has become so successful because of the support of the community.

"Almost every person in Northwest Indiana contributes in one way or another whether it's donating or just shopping at one of our sponsors," he said. "It was a great success and shows what one family can do with the help of the whole community. We want to thank the community for this accomplishment."