For over thirty years, Albert's Diamond Jewelers has celebrated the heroes in its community by hosting the Hometown Hero Awards. 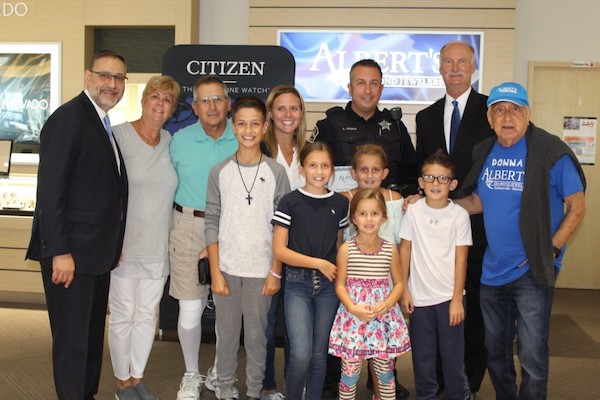 
For over thirty years, Albert's Diamond Jewelers has celebrated the heroes in its community by hosting the Hometown Hero Awards. Saturday afternoon in Schererville, policemen, firemen, and EMT's were honored for their service and devotion to their communities.


Years ago, an out of control fire spread through Albert's at their original East Chicago, IN location. The smoke was thick, and Fred Halpern and his family barely made it out alive. It was the firemen's dedication and quick thinking that saved them. This is the reason that Halpern family and Albert's started the Hometown Hero Awards.


"Those firemen saved our lives," Halpern said. "I owe a lot to the fire and police departments; this is our way of showing appreciation."


Albert's Diamond Jewelers is owned and operated by the Halpern Family, which drives them to engage with both the community and families.


"It's such a great day, and we get to meet so many amazing people from our community," said Joshua Halpern, President. "To see these individuals go above and beyond to do extraordinary things. Every day we take it for granted, and I'm honored to present them with their awards."


The heroes were presented with both a certificate and an honorary watch to commemorate the special moment.


The police officers being honored were given the Citizen Thin Blue Line watch that was released a year ago. Albert's Diamond Jewelers is the second affiliate in the country to carry this special timepiece produced for law enforcement officers. It comes in an exclusive Thin Blue Line watch box and has a custom engravable case back with a gold tone card to personalize with the officer's name, rank and badge number.


Citizen Brand Representative Les Mokrzycki was honored to donate the watches to the policemen of the community. "It's made specifically for law enforcement officers. It's thin blue line represents the brotherhood of all police officers," said Mokrzycki. "The Blue Line is what protects us; it's the last of defense."


"Both my parents told me that if I was going into law enforcement, I need to be the best there is," stated Sheriff Oscar Martinez of Lake County. "So that is my goal."


Officer R. Merschantz was one of the police officers who won the Hometown Hero Award.


"It's incredible. I feel very privileged for being recognized," he said.


Officer Merschantz was nominated by his chief for his outstanding effort to help people overcome drug addictions through the Police Assisted Addiction Recovery Initiative program (PAARI). Along with his former colleague Officer D. Borgeti, he researched ways to help the community. They founded (PAARI) and worked hard to get the program approved in Griffith.


"It's helping change lives for the better," Merschantz said. "We want to show people that we are here to help them, and they can come to us for help if they've got an addiction."


Albert's Diamond Jewelers wanted to recognize heroes, all while supporting the community and its youth. Along with the awards given to local heroes, Albert's Diamond gave students Most Improved Student Awards In hopes that one day they will become a future Hometown Hero.