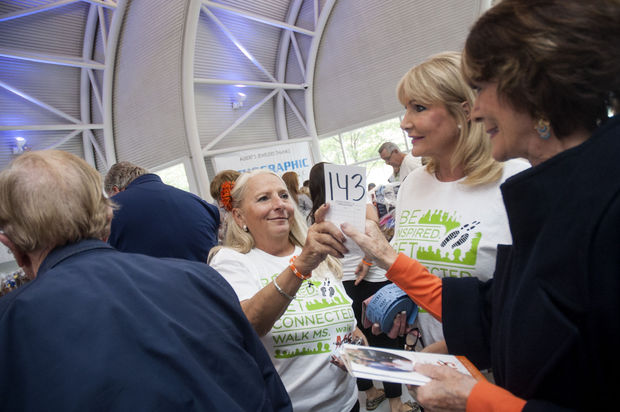 Helen Garrison, second from left, hands Carol Long, of Munster, far right, her bid number Sunday after she and her husband Woody Long, far left, successfully bid on a neckace during the eighth annual Albert's Jewelers MS Auction at the Indiana Welcome Center in Hammond. Second from right is Shelley Cummings of AlbertÃ¢'‚¬™s.

HAMMOND | Seldom is a fight so fun.

The fight is against Multiple Sclerosis, and the fun on Sunday was the 12th annual MS Auction hosted by Albert's Diamond Jewelers at the Indiana Welcome Center.

A large crowd had hundreds of items and baskets of goods to bid on in live and silent auctions that raised money in an attempt to defeat the disease.

Albert's owners Fred and Josh Halpern have chosen the National Multiple Sclerosis Society as their charity of choice because Fred's wife and Josh's mother, Donna, is affected by the disease.

He expected a crowd of 600 people and said that if the monetary goal was met it should put the 12-year total raised to more than $1 million.

"Because of events like this and people like you, we are going to find a cure for MS some day," Josh Halpern told the crowd.

All items were donated, including numerous jewelry pieces, a large assortment of sports tickets and memorabilia and items from local businesses.

"Even if it's not for my sake, for everybody else with MS," she said. "What a terrible disease. It really is."

Fred Halpern called the annual auction a "labor of love" and an example of the community coming together for a cause.

He commented on the number of local businesses that contributed and said all of the more than 500 suppliers that work with Albert's donated.

"Its a real feather in the cap of Northwest Indiana that we can do this," Fred Halpern said.

Jalapenos Mexican restaurant and the Albanese Candy Factory donated food that kept attendees happy and full as they explored the tables full of auction items.

One person who did just that was Sandy Skalba, of Hebron.

She looked for baskets containing gift certificates from local restaurants, and there were plenty of them.

She earlier had purchased some Chicago Bears garbage cans in the live auction, and her husband donated a go-kart he made for the cause.

"It's just fun to see the people bid so much," Skalba said.

Skalba was diagnosed with MS three years ago and said she shops at Albert's because of all the store donates toward research.

Nancy Paunicka, of Portage, was an active bidder in the live auction.

Early in the afternoon, she had already purchased a ring for $150 and diamond studded ear rings for $925.

"It's for a good cause and you can go Christmas shopping early," she said.

It seems fighting MS runs in her family.

Melissa Jolly, of Lynwood, kept track of her silent auction bids on her phone to see where she stood with them.

"You get some really good deals," Jolly said. "Sometimes I'm surprised at how cheap that the live auction goes for."

She said she looked forward to Pandora bracelets and a Movado watch to be auctioned later in the day.

It was standing room only as people used their phones to take video of artist Elliott From as he painted a large picture of the Blackhawks logo on canvas as the unofficial Blackhawks theme song "Chelsea Dagger" played.

Since three bidders went that high, From agreed to paint two more at a later date so all three could have one at that price.

One of the bidders was Rob Guthrie, of St. John, who sat at a table with his wife and two daughters.

He said he missed out on the same painting last year and was not about to do so this time.

"So many good people come together for a great cause," Guthrie said.